I'm kind of old-school in my printer designs. I like things to be as close mechanically perfect as I can figure out how to make them, instead of putting sensors everywhere and hoping the controller's firmware can compensate for poor materials or construction.  If you've followed any of my blog posts on UMMD you'll know I prefer to use a flat print bed, accurately trammed instead of putting a bed sensor on the extruder carriage.  I also prefer to use endstop switches in all axes.

When I built UMMD one of the things I put some extra effort into was a finely adjustable Z=0 endstop.  I used a lever and cam to effectively reduce the adjusting screw movement to approximately 100 um per rev of the screw. It has worked well and reliably for a few years but during recent work on the machine I noticed some things I didn't like, leading me to redesign the whole thing. 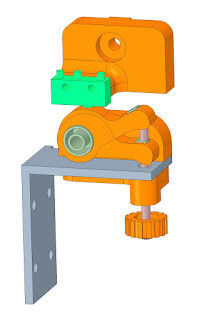 The main problem is that the switch is mounted solidly on the frame of the printer and the adjuster/lever/cam are mounted solidly on the moving part of the Z axis.  Over the last few years as I've swapped out hot-ends and extruders, changed a few things in the Z axis, and rezeroed the bed a number of times, the adjuster has crashed into the switch a few times.  The result is that the switch has put some dents in the cam so adjustment isn't as smooth and reliable as it was when the whole thing was new.


I could print a new lever and cam but that wouldn't prevent the problem from happening again, and making it out of metal seems like a lot of trouble.  The way the switch is mounted is a big part of the problem.  It should not be set in opposition to the motion of the Z axis.  After changing to optical endstops in the X and Y axes, I decided to do the same in Z with the intention of mounting the endstop so that if the bed moves up beyond the endstop it won't damage anything.

I could just mount the switch on a spring that would allow it to move a bit if the cam bangs into it too hard, but there are other considerations as well. The original lever and cam design worked pretty well, but it wasn't really linear so I could never be sure of the exact amount of movement I was getting when I turned the adjuster screw.  I wanted to get 100 um per rev of the adjuster screw so that I could accurately move the bed in small amounts like 20-50 um.  I decided to look for an alternative and discovered something called a "differential screw".

This video illustrates the concept:

A more compact approach is to have a screw inside a threaded tube that has one pitch on the inside and a different pitch on the outside.  Like this:


If you have deep pockets you can buy off-the-shelf differential screws from specialty mechanical parts companies. Beware the ~$20 "differential screw micrometers" being sold on ebay.  They appear to be simple 0.5 mm pitch screws with a nice knob.  I don't have the deep pockets for a real differential screw, and since I wanted 0.1 mm per turn of the screw, I looked for standard screws that had 0.1 mm difference in their pitches.  A look at a metric thread pitch table reveals multiple possibilities.

1) For metric threads pitch is the distance between threads.
This table comes from: https://www.engineeringtoolbox.com/metric-threads-d_777.html

I selected the M5/M4 combo.  Every turn of the M5 screw moves the screw forward 0.8 mm and moves the sliding M4 nut back 0.7 mm leaving a net forward motion of 0.1 mm at the sliding nut.  If I use the sliding nut to activate my endstop switch, I'll have a very finely adjustable endstop, and unlike my previous lever/cam arrangement, every turn of the screw should give exactly 100 um with accuracy limited by the screw thread quality.  This technique can be used to bump a mechanical switch or to trigger an opto interruptor.

One problem with this arrangement is limited range of motion at the output.  If I turn the M5 screw 10 times, the screw will move 8 mm.  The sliding nut will move 1 mm in the same direction as the screw.  So if I want 10mm adjustable output range, the 5mm screw would have to be at least 80mm long and the 4mm screw at least 70mm long. Not even UMMD has room for a 150mm long Z=0 screw.  Nope, I won't be adjusting the screw over a 10 mm range.

UMMD's opto endstop mounts on the Z axis vertical T-slot frame so the endstop can easily be repositioned within the adjustment range of the differential screw, so I settled on a reasonable differential screw adjustment range of 2 mm.  The 5mm screw has to move 16mm and the 4mm screw 14mm.  That means the exposed thread length of the screw has to be 30 mm plus the thicknesses of the fixed nut, the thumbwheel, the sliding nut and the mount.

I tried printing a jig to hold two screws, one M5 and one M4 butted end to end, with a spherical space inside the jig at the joint.  I screwed one screw into the jig, then inserted a drop of epoxy, then screwed in the other screw until it stopped against the first screw.  After the epoxy set, I cut off the jig.  The force required to cut off the jig resulted in breaking the epoxy joint between the screws.  Hmmm.

Someone at the makerspace suggested that I could drill holes in the ends of the screws and use a pin to hold them together, but I couldn't figure out a good way to accurately drill a ~1 mm hole in the axial center of a screw.

Another suggestion was to make a coupling nut that was threaded for M5 on one side and M4 on the other and then just screw it together with locktite or epoxy to ensure it can't easily come apart.  This is probably the easiest way to go, but adds the length of the coupling nut to the screw.

Finally, someone else at the makerspace suggested that I drill and tap a block of metal, then split it with a saw and use it as a clamp to hold the screws for welding.

In the end, I mounted a 50mm long M5 screw in a collet on a lathe and turned the end 20 mm down to 4 mm diameter, then threaded it with an M4 die.  It was actually pretty quick and easy, mostly because I had help from an expert lathe operator at the makerspace.


The Rest of the Parts


Once I had the screw, the rest was easy.  I designed and printed a thumbwheel with 10 evenly spaced bumps to make it easy to set the position - just turn the screw by 1 bump for every 10 um of movement.

The base of the part (the red block under the bracket in the image below) is the fixed nut that the M5 screw threads into.  I used a block of PTFE, 5mm thick, because it works well for that type of operation in the kinematic mount for the bed.  I drilled an undersized hole and let the M5 screw roll its threads in the plastic.  It is gripped firmly but still easily adjustable.


The flag is a printed part (blue) with a hole to fit an M4 nut.  I found a spring in my junk box that pushes the flag up against the nut and minimizes backlash. The flag spring and screw fit into a printed square tube (yellow) that prevents the flag and nut from rotating as the adjuster screw is turned.  When the adjuster is turned 20 times, the screw moves 16 mm and the flag moves 2 mm in the same direction as the screw.


You can't tell from the picture, above, but if the opto endstop should fail and the bed keeps moving up, the square tube tube will have room to pass by the opto interruptor, so nothing will get damaged.  The bearing blocks on the Z axis will eventually hit the physical stops.

The Fusion360 CAD file is here and the STL files of the printable parts are here.

The opto endstop is screwed to a printed bracket that is held on the printer's Z axis vertical frame with a bolt and t-nut.

Other Uses for Differential Screws

A few people on the 3D printing forums have suggested that a differential screw would be a good thing to use in a kinematic printbed mount since the adjustments in those are usually very small.

How about a motor driven microscope stage?


I have run some tests on the precision of the opto endstop and tested the differential screw adjuster.  New post here.

Leave comments or a questions here and I'll try to post a response as soon as I can.